Ernie James was born in Memphis, TN in 1950.  He felt God calling him preach at the age of 13. It was not until between his junior and senior year of college that he responded to God's call. He went to Seminary in 1973, in Fort Worth, TX, graduating with a Master’s in Religious Education and Divinity, and a Doctorate of Ministry.   He is married to his wife, Dana, and has two children, Ashleigh and Brandon. His wife and children are all involved in service for the Lord.  He has 5 grandchildren ranging in age from 9- 16 years.  His first full time position was a youth minister in Kingsville, TX. After leaving there, he went to San Antonio TX, and was involved with student ministry. Ernie's first lead pastoral position was at Willow Drive Baptist Church in Lake Jackson, TX, for 10 years.  He moved to Tennessee and took a lead pastor position at First Baptist Church Bolivar. Fifteen years later, he moved to Indiana and pastored Calvary Baptist Church in Greenwood.  He is currently serving as the Interim Pastor at Eternal Life. 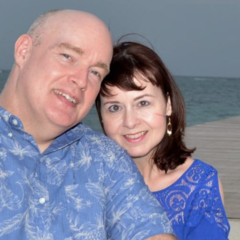